Conformation (Show):
Judging the dogs by the breed standard

The conformation or breed ring is where breeders and owners exhibit their dogs to obtain a judge’s opinion on how the dogs conform to the accepted breed standard. In Canadian Kennel Club shows, Tollers are judged against the CKC Standard. Once dogs have gained the required points, they are awarded the title of Champion (CH) which indicates they have competed against other dogs and conform to their breed standard.

At a show, dogs are first judged against others of their own breed divided by sex, age and class. Once a Best in Breed is chosen from all Tollers being shown in that show, the dog goes on to compete at the Group (CKC: Sporting) level against the breed winners of other breeds in their group to determine which dog is the best representative of that group on that day. The Group winner then moves up to compete for Best in Show. One dog from each group will be presented to the judge and only one dog can win the coveted Best in Show ribbon that day. The same procedure is repeated for puppies chosen Best Puppy in Breed where they go on to compete for Best Puppy in Group and Best Puppy in Show.

The Nova Scotia Duck Tolling Retriever Club of Canada hosts a National Specialty show for Tollers every two years. A specialty is a show intended to showcase the breed and all of the events and prizes are dedicated to Tollers alone. The National Specialty is held at a different location each time to enable a variety of participants at each event and to allow the members in each region of the club to take a turn in playing host. Regional specialties are occasionally offered in non-national specialty years as well.

Winning a Specialty is especially rewarding. The competition is quite different from a typical all-breed dog show where you may only see one to five or maybe ten of your breed. At a Toller specialty, there have been as many as 140 dogs. To win from that field of dogs is extra special, to say the least! 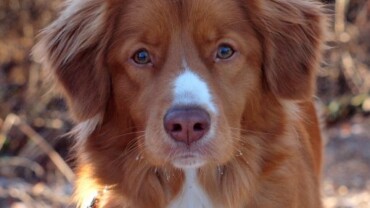 Tracking is a sport that any dog can do, but Toller excel at this sport due to their ability to find downed birds in all kinds of cover, usually by using their noses. 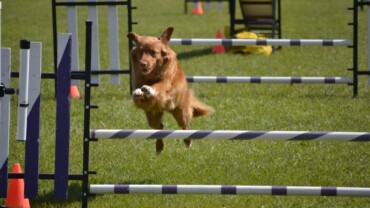 Many people train their dogs in agility just for the enjoyment of developing teamwork with their dogs and the sheer fun of running together towards the same goal.